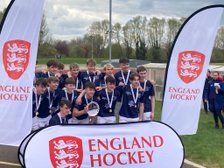 Tense penalty shootout victories over the Isle of Man and Spencer in the quarter and semi-finals respectively had helped the Boys u18s to progress to the National Final at the University of Cambridge.

No shootout was required here though as North Stafford dominated against their Warwickshire based opponents, with goals from Oli Moss, Zach Edwards, Teddy Halket, Nathanael Yerbury and Oli Power.

After 17 minutes Moss gave North Stafford the league from close range, and two minutes later Edwards doubled the advantage as he reacted quickest to a loose ball to finish from only three yards out.

North Stafford continued to push for a third goal, Halket being denied from drag flicks at short corners, Power coming close on the reverse, whilst Jack Royall and captain Louis Coggins constantly probed forward from midfield.

Goals change the direction of games though and Hampton pulled a goal back right on the stroke of half-time, as their captain Samuel Alcock slotted home past keeper George Jenkins from a short corner to make it 2-1.

Hampton’s best spell of the game then came in the first ten minutes of the second half, as Jenkins was forced into two saves, including one superb diving stick save that was tipped around the post. Dan Read and Piers Copeland continued to marshal the defence with calmness belying their age and the fourth goal of the game was to be crucial.

With 47 minutes on the clock, North Stafford were awarded a penalty stroke, after the ball was blocked on the line by a Hampton body. Halket, who had score twice in the semi-final and four times in the quarter-final, calmly stepped up to slot the ball into the bottom right hand corner to make it 3-1.

Ten minutes later Yerbury secured the victory with a fourth, firing home into the bottom left-hand corner from the top of the D, before Power deservedly rounded off the scoring in the 63rd minute by drilling a trademark reverse into the roof of the net.

The strong and buoyant travelling North Stafford support remained in fine voice throughout, as the Boys comfortably closed out the final minutes to lift the club’s first ever National Trophy.

Boys u18s Coach and Head of Junior Hockey, Dave Washington, commented: “Everyone at the club is incredibly proud of the boys and their historic achievement. For many the journey at the club started when they were only 7 or 8 years old, and to see them perform so brilliantly and deservedly win a National Title is a credit to their hard work and everyone who has supported them.”

Team Manager, Rich Halket, added: “The whole cup run had all the emotion, tension, and excitement of a Hollywood sports movie. I’m sure that the players coaches and fans will never forget the journey that the boys took us on, it was an honour to be a part of it. They are quite simply an outstanding group of young men both on and off the pitch.”